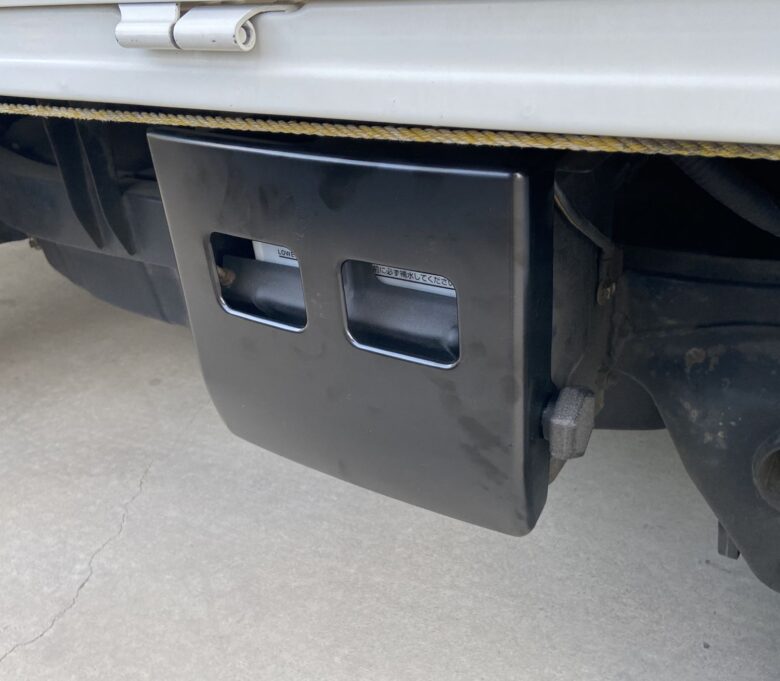 The Subaru Sambar is a great vehicle. I even venture to say it looks good. Unfortunately as they inevitably fell to the cost cutters, a few things fell by the wayside. One of those items is the Battery box cover. They just stopped including it in the base model trucks.

Frankly it looks really sad with the battery just slung under the bed like an afterthought. It also leaves your battery vulnerable to people tampering with it.

Fortunately the cover was the same on the TV1 and TV2 models, and so the covers are still available for relatively cheap at under $20. That is if you can stomach the shipping which can be easily three times that. While we were ordering a bunch of other small pieces and a clutch to keep on hand, we had one of these thrown in the order. It is part number 651009480.

It is a pretty slick piece that goes on easily. There are two coated pegs that go in on the left side, and you just use an M6 bolt on the right to hold it together.

What fun is that though? You have this great new cover in black, and a shiny bolt that draws your eye away. It also means you have to have tools to open it up if you want to get in there.

This looks like a job for a 3D Printer!

Then throw it in Prusa Slicer for our Prusa MK3S MMU2:

Then print it in Priline Carbon Fiber Poly Carbonate following the instructions for the file we uploaded to Thingiverse, here.

After pressing in an M6x30 bolt (you could certainly get away with smaller, even an M6x10 would probably work) you end up with the following:

We did zero post processing. This is what came off the printer. Really we should have sanded it a little, and then hit it with a heat gun to get it to a smoother finish, but why?

The battery box still needs a radical cleanup, but for now, it looks infinitely better.

Here is hoping you find this of use!