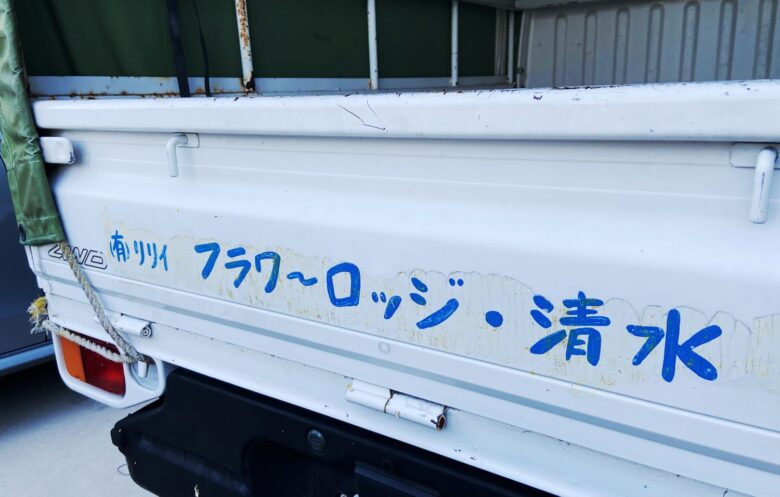 Well, I assume it is Kanji. There are several writing types in Japan, of which Kanji is only one, but I’m rolling with it.

When the truck was inspected after the auction, it was noted that there was very old, very weathered and cracked, vinyl on the tail gate. I wasn’t too concerned. Generally that is nothing a little heat gun, some plastic razors, and a bunch of Goo Gone couldn’t handle.

Once TynyTruck arrived, it was immediately that there was a treasure under that vinyl. This was both exciting and daunting at the same time. It was exciting to get some hand painted Japanese characters on the truck. It was scary because I was concerned about getting the adhesive off without stripping the letters right off the paint.

We began scraping with plastic razors, which were working to a degree, but it really started to come off when we applied some heat with a heat gun. Once we got that in the mix, it all pretty much just scraped off, leaving behind a nasty residue of adhesive and some otherwise tenacious bits of vinyl.

Concerned, we began to use Goo Gone to remove the adhesive. This was working, but it was surprisingly slow going. I already had some professional cleaner on the way, and so we opted to wait until it comes to finish up the job.

Now, though, we have exposed the lettering. After running it through Google Translate, the original text appears to be:

Run through Google Translate it translates to:

I am still trying to break this down, but the Ari Lii seems to be in separate smaller text on the left. It looks like it translates independently to Ari Lily. That leaves the rest to possibly mean the Ari Lily Flower-Lodge in Shimizu, Japan. Another possible translation would be something like The Ari Lily Flower Shop at Lodge Shimizu.

Shimizu is a decently large port city at the foot of Mt. Fuji, just North of Yokohama. This makes sense, as Yokohama is the port that Tyny Truck was shipped out of.

I will keep trying to track it down, but the language barrier may make that more difficult a lift than I can manage. If you know more, please let us know.